Obviously we are talking about taking boat photographs with the vessel underway in a setting conducive to the relevant illusion. As “Over-boated?” teaches; latent in the buyer’s mind are a pre-existing set of illusions as to what boating is all about.

Don’t even think about static shots of the boat under covers, parked on some marina. This is heresy!

Your boat photographs are hopefully stoking a barely smouldering heap of latent buyer emotions into a flaming conflagration.

You may need to take hundreds of boat photographs before you find one or two good enough to serve as your principle photograph. It is worth any amount of pain to get the perfect pic.

If you use a digital camera, shoot to the highest resolution possible. If you use a conventional 25mm camera use a medium length lens. A wide angle lens should only be used for the interior below decks.

Make sure that the boat is cleared of miscellaneous gear and the scene is set as per the principles laid out in “Over-boated?”.

Take your shots in the softer light of early morning or late afternoon in preference to the glare of mid-day.

The background should offer no distracting detail.

First preference for shots of sail-boats, is close-up under sail and from the leeward bow.

Second preference is close-up under sail and from the leeward stern.

Even today, Beken is considered the undisputed master of boat photography. And he had a fast launch specially built for the purpose.

Generally Beken’s shots were taken from the leeward bow quarter or leeward stern quarter. Much later in his career he used helicopters.

Now we have drones equipped with digital cameras. The possibilities are endless.

Don’t forget the photographs of iconic bits of gear. 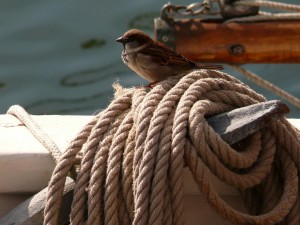 The Zen of how to sell your boat for a great price…and not get royally SCREWED by brokers, tyre kickers and sundry 'bottom feeding' inhabitants of the maritime world 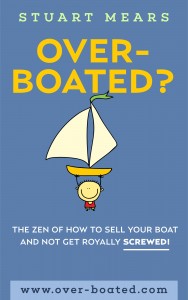 “Over-Boated?” is a ‘how-to’ guide for boat vendors, written with levity and humor by one who deeply understands the subject. As a many time DIY boat vendor, my frustration in the past has always been: why does it always seem to be a buyer’s market just when I want to sell my boat? But never again will I worry about that!” Garrick Findley- SV Finesse Cooktown, Queensland

“After reflecting on the information in Over-boated, it was apparent that we had done the exact opposite of just about every principle in the book. Consequently our cruising yacht had been on the market for about 8 years. Anyway, after us both reading the book, we did some soul searching and got seriously to work following your recommended sequence step by step. We had our cruising short story written and photos prepared and forwarded to a friend who was doing our website. We hadn't yet placed an advertisement and the web site hadn't even been completed. Yet eerily enough and out of the blue, we got three calls within a month, and, long story short, ended up selling the boat in March! Alexandra Mateer - NSW
"Over-boated" is about much more than selling a boat - it's better described as a blue-print for succeeding in selling anything for true value in market conditions that on the face of it appear to be impossibly adverse. Martin Lloyd UK
“After six years cruising from Canada to Cuba and Central America we’re returning to Australia in November 2015 and have consequently placed “SV Bluefin” with an US yacht broker. We’ve also given the broker extracts from ‘Over-boated”, because your book powerfully resonated with us on the matter of buyer emotion, boat presentation and advertising. Unfortunately we don’t have the time to stay in the US and sell Bluefin ourselves. Will our US broker adopt the methods in Over-boated? We certainly hope so. Thanks again for a great read”. David & Julie Tait - Charleston, South Carolina (ex-Melbourne)
"Over-Boated? is insightful on the art and science of selling a boat. We followed the Over-Boated prescription to the letter and this is the fabulous result. (A sale for $600K)." Kristal Berry –SV Lucy ex. Port Huon Tasmania (wooden boat aficionado)
Wordpress SEO Plugin by SEOPressor